Supporting the next generation of infant studies scholars

A core goal of ICIS is to mentor future leaders of the field of infancy. The Founding Generation Summer Fellowship for Undergraduates aims to develop the next generation of scholars to advance innovative research on infancy and translation of research for the public good.

The field of infant research is critical to understanding human development and the application of research findings to education, health, and policy worldwide. This kind of research and outreach requires the participation of individuals from a wide range of backgrounds. Unfortunately, that breadth of representation is lacking.

To address the urgent need of broadening the representation of students, ICIS has created paid summer fellowships.  We encourage all interested students to apply, especially those from under-represented and under-resourced backgrounds, as well as any students who are in the first generation of their family to attend college.

The program pairs promising students with researchers from around the world who conduct cutting-edge science. Identified mentors will work with students over an intensive 8-week period. Students receive financial support (up to US$4,000) to enable them to meet with mentors, participate in lab meetings, work with staff, doctoral students and postdoctoral fellows , and build critical skills through hands-on training in research methods. Mentors may also choose to support a portion of the $4000 stipend for the support of a student.  Upon completion of the fellowship, students present their work at a dedicated virtual symposium, and are encouraged to submit their work at the 2024 Congress to be held in Glasgow, Scotland (they may apply for travel support).

This initiative builds on prior ICIS programs, recognizes ICIS forebears, and honors the contributions of key figures in the Congress’s establishment.  The brief history of ICIS (below) describes the individuals who inspired the creation of the Founding Generation program.

The Founding Generation Summer Internship Program was established to recognize the contributions of past scholars of infancy studies by supporting the next generation of researchers in infancy. The origins of ICIS, which was known as ISIS (International Society on Infant Studies) from its inception until 2015, can be traced to an informal, interdisciplinary group of 30-50 researchers (the Correspondents on Research on Infants or CRI) that included Psychologists, Pediatricians, Psychiatrists, and Neurologists. CRI members—representing nearly all the major infancy researchers at the time—began to meet in the early 1960s to share their work on infant development. A sub-group of CRIers met monthly in New York and New Jersey, including Marc H. Bornstein, Nathan Fox, Judy Gardner, Bernie Karmel, Michael Lewis, David Lewkowicz, William Fifer, Susan Rose, Holly Ruff, and Gerry Turkewitz. Others who often often visited the group included Joe Fagan, Robert Fantz, Marshall Haith, Bill Kessen, Marian Sigman, and Daniel Stern.

At the time, advances in medicine and increased numbers of premature and sick infants surviving pregnancy and childbirth led to an explosion of infant research. The rapid expansion in infant research highlighted the need to establish an independent venue for CRI members to share their theoretical work and empirical research.

As a result, the first International Conference on Infant Development was organized in Providence, Rhode Island in 1978, under the leadership of Lewis Lipsitt. (Notably, Lewis set the stage for ICIS meetings to have an element of fun mixed in with serious science by inviting a professional yo-yo master to teach researchers how to use a yo-yo!) For several years, the larger ICIS conference followed CRI meetings, being held in whichever city served as the designated CRI site. The local CRI researcher served as program chair and made all arrangements (including signing contracts for hotel “rack rates” and determining the location of the conference dinner). The broad appeal of the ICIS conference ensured its success: registration fees consistently exceeded costs, allowing the congress to consistently meet in the off-years of SRCD.

In addition to hosting the first ICIS conference in Providence, Lewis Lipsitt served as founding editor of Infant Behavior and Development (IBAD), which grew further under the vision of Carolyn Rovee-Collier during her 18-year tenure as editor. Lipsitt and Rovee-Collier also founded and co-edited the series Advances in Infancy Research, to which many original CRIers contributed.

Although ICIS members adopted IBAD as their unofficial journal, by the 1990’s the Society wanted a journal that it could independently control. In response, Esther Thelen (President of ICIS at the time), Rachel Keen (President-elect), Nathan Fox, and Marian Sigman negotiated with the assistance of Attorney Jeff Pasek the new journal Infancy with Lawrence Erlbaum in 2000. Leslie Cohen served as the first editor of ICIS’s flagship journal, followed by Richard Aslin, Martha Ann Bell, John Colombo, and Gavin Bremner as current Editor.

Through philanthropy we reaffirm our commitment to the future of our field. We invite you to ensure the success of the Founding Generation Summer Fellowship and celebrate our community by making a donation, via the Go Fund Me campaign. You may make a donation in recognition of an influential person who shaped your life and career.

Other ways to Donate

“In reflecting upon my career and the many intellectual threads that influenced my scholarship, I realized that my primary allegiance has consistently been aligned with ICIS.  It is the biennial meeting I always attend, the focus of my research on human development, and the set of colleagues with whom I unequivocally identify.  It was natural, therefore, when I was able to make a gift to a scientific organization, that I would direct my gift to ICIS.  I hope that others who feel the same way about ICIS as I do will consider adding their support to the Founding Generation Fund so that our discipline remains vibrant and relevant to the next generation of scholars.”  – Anonymous Donor

Building on the success of the initial cohort, in the summer of 2022, ICIS paired 6 undergraduate students with mentors.  Testimonials from mentors and students show that participants greatly valued their experience. Students highlighted many benefits of the program, including learning about developmental science and gaining a deep appreciation and knowledge of a specific area of infant research. The summer fellowships inspired, educated, and enabled students in a variety of ways.

Thoughts from our Students

Thoughts from our Mentors

We had an internal from a university in the US. She was trained to code multimodal word-learning cues in the video data. After several iterations of training sessions, she was able to reach a pretty good level of agreement statistics with our established set of training materials. Based on her coded data, she was able to draw a story about the distribution of various cues in infants’ learning of nouns and verbs. It was probably one of the most intense yet rewarding 8-weeks of summer experiences for her. We wish her a continued success in her graduate studies.
Eon-Suk Ko

Jaemin was one of our star undergraduates this summer. She was a detail-oriented and dedicated member of the lab team, and her work examining the longitudinal relationships across measures of early “empathy” has the potential to shape our understanding of the nature of infants’ earliest reactions to others’ distress. We will miss her!

My research team and I are so grateful that we had the opportunity to work with Aditi this summer. She was a fantastic addition to our lab. She contributed to multiple projects and was extremely productive during her time here. I was able to see Aditi’s confidence grow over the course of the summer as she learned a range of new technical and analytical skills, delved into literature on infant attention and temperament, and honed her communication skills. By the end of the summer, she was a leader in the lab when it came to problem-solving and training other students. We all loved seeing Aditi identify her passion for infant research and we are excited to continue to work with her and follow her career. Thank you to the ICIS Founding Generation Fellowship program for supporting Aditi’s work with us!

In summer 2022, I received a student from Italy as an intern in my lab in Norway. That was her first ever experience working in a lab with ABR-EEG and infants, giving her the opportunity to see first hand various processes and aspects of this side of academia, and how we bring new knowledge into the world. I believe, her training during this period gave her the opportunity to practically consider her next steps in life as well as to create a life-lasting, worthy academic and friendly connection.

It was thrilling to watch Deisy as a developmental scientist during this internship. The opportunity to be immersed in the lab activities really made the difference: She got a sense of both the big-picture and quotidian aspects of research. In all, Deisy contributed to a project from its conception, and she’ll carry it through as my lab’s manager after she graduates.

In addition to advancing her own project and skillset, being able to experience how research is done in another lab, institution, and country (through attending lab meetings and hearing about other students’ work) expanded Zareth’s view of academic research and developmental science. She said she felt part of something bigger, and ended the internship excited about being part of the scientific community and the possibility of pursuing further research training abroad.”

In the summer of 2021, ICIS paired 8 undergraduate students with mentors.  Testimonials from mentors and students show that participants greatly valued their experience. Students highlighted many benefits of the program, including learning about developmental science, gaining a deep appreciation and knowledge of a specific area of infant research; acquiring skills, research tools and know how in behavioral coding, brain recordings, statistical analyses, and research dissemination.

The summer fellowships inspired, educated, and enabled students in a variety of ways.

Fellows from 2021 reported that the experience gave them a greater awareness of infancy science, with experiences that were both broad and deep: 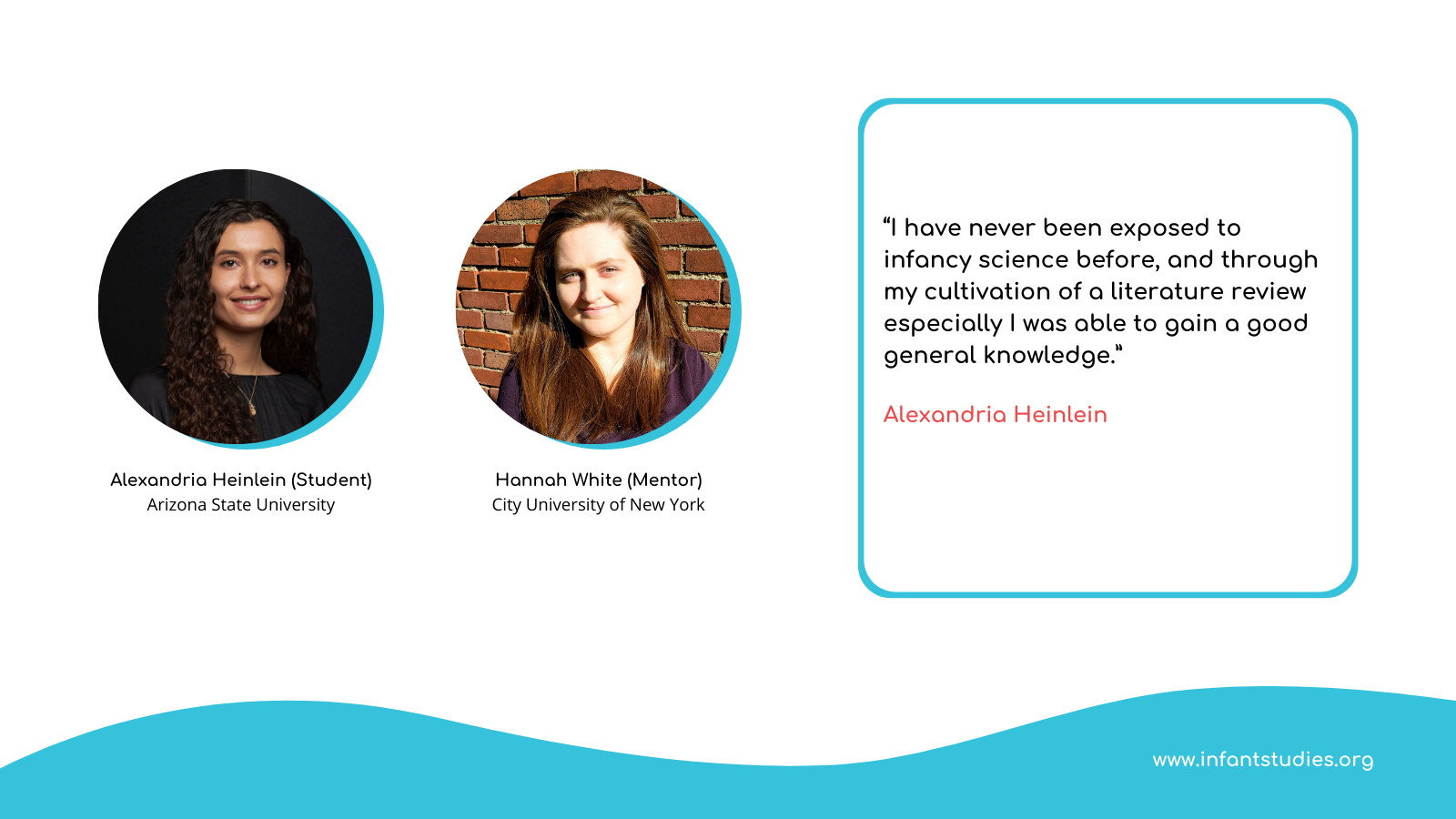 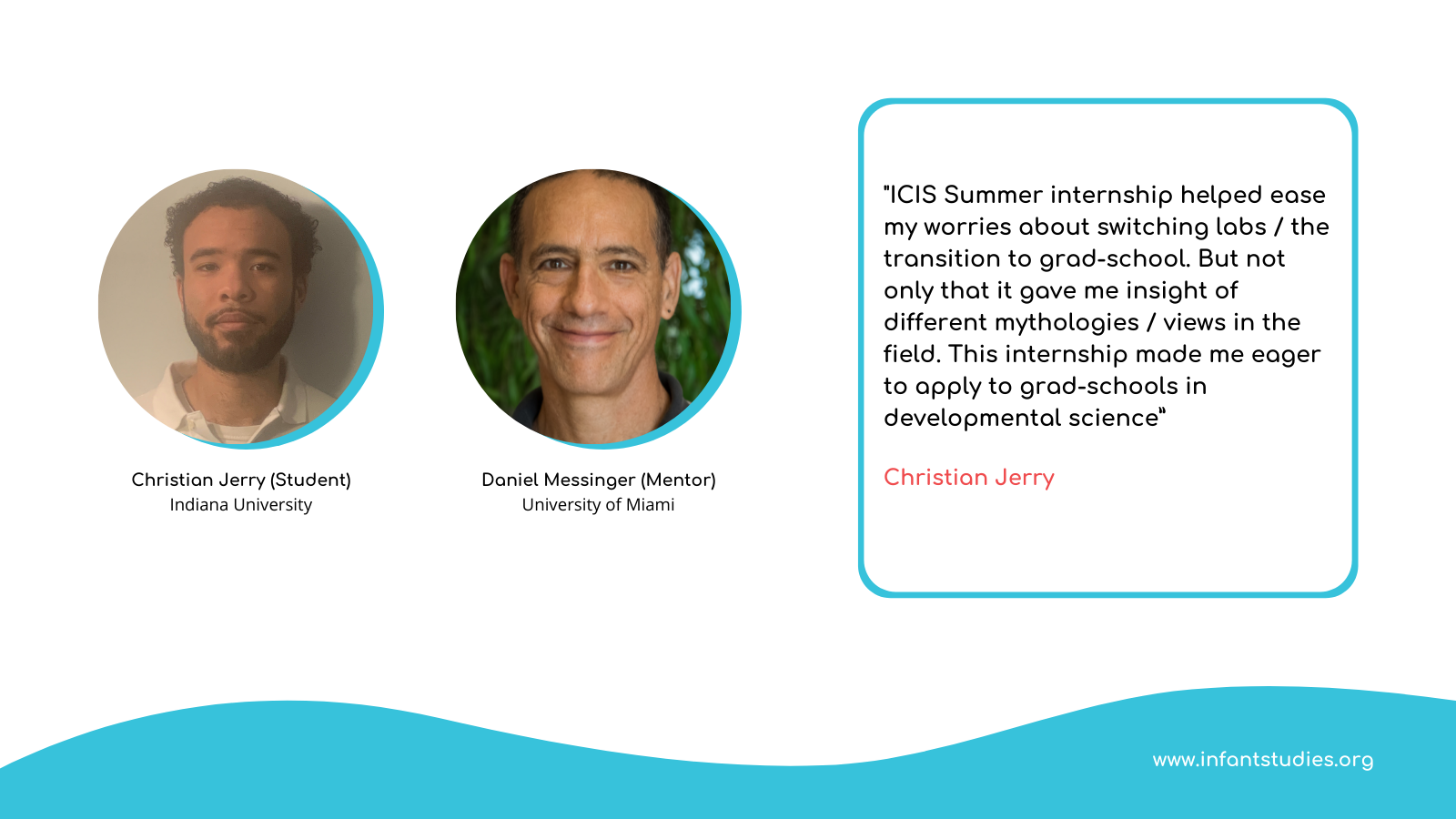 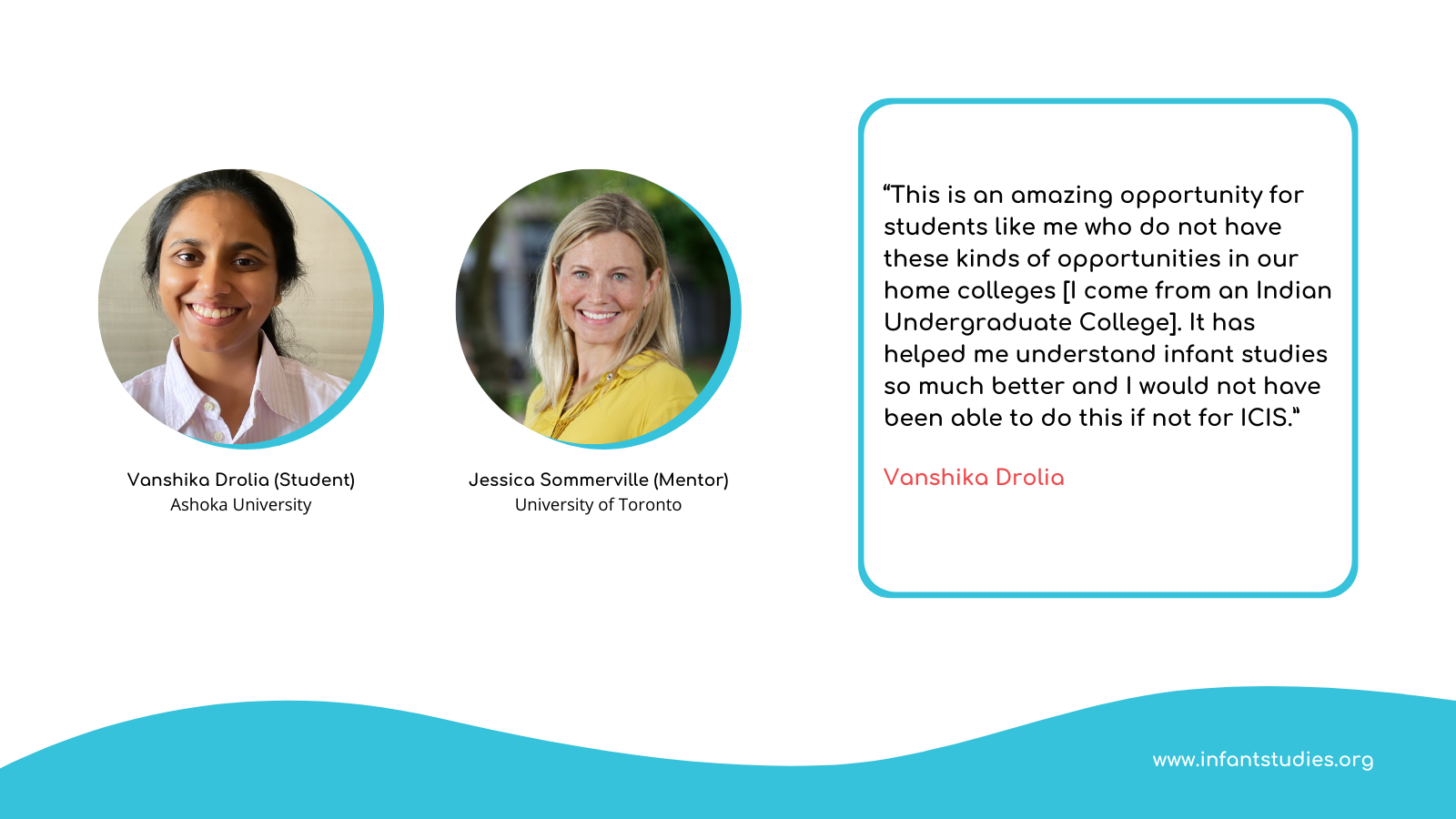 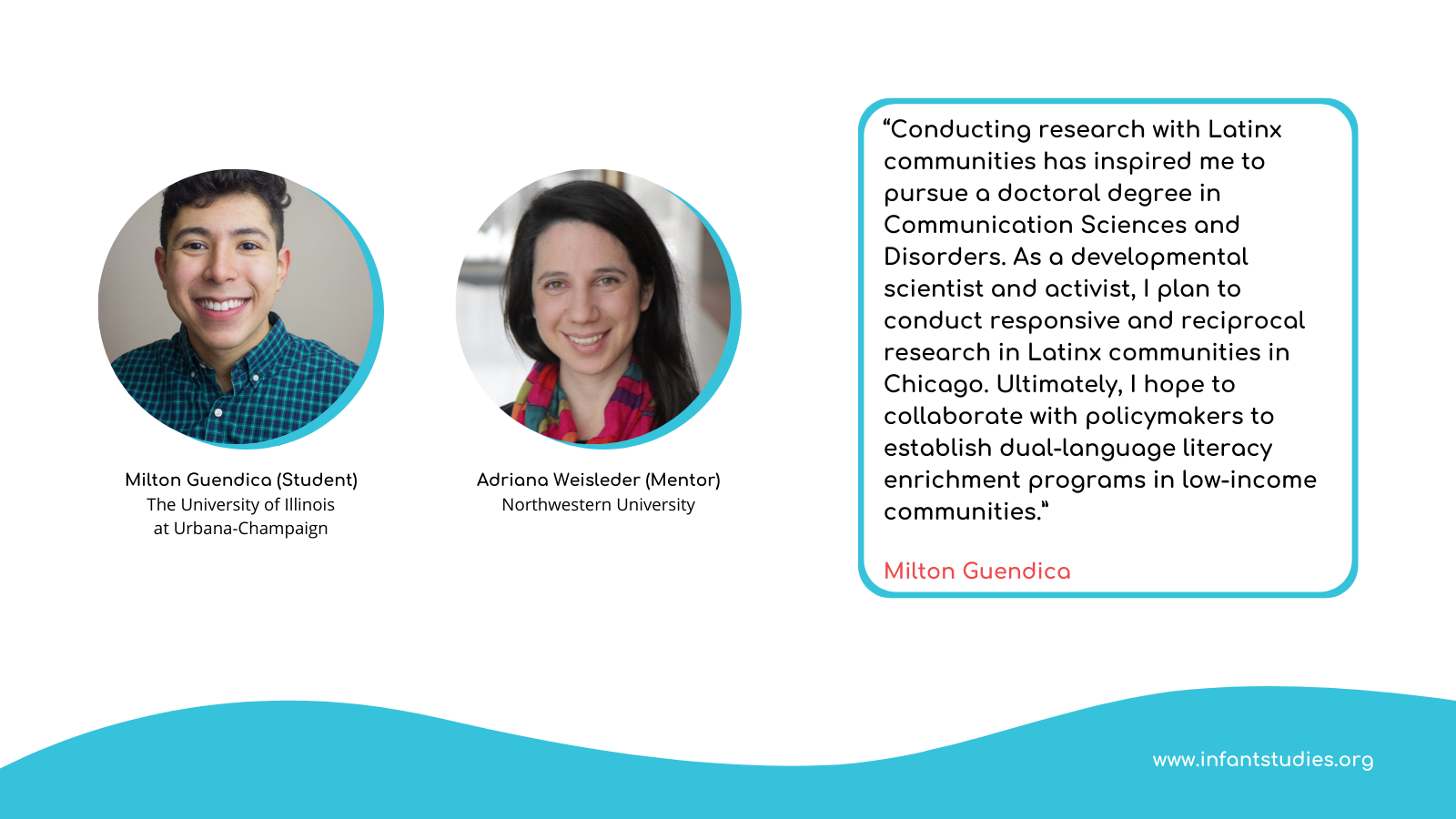 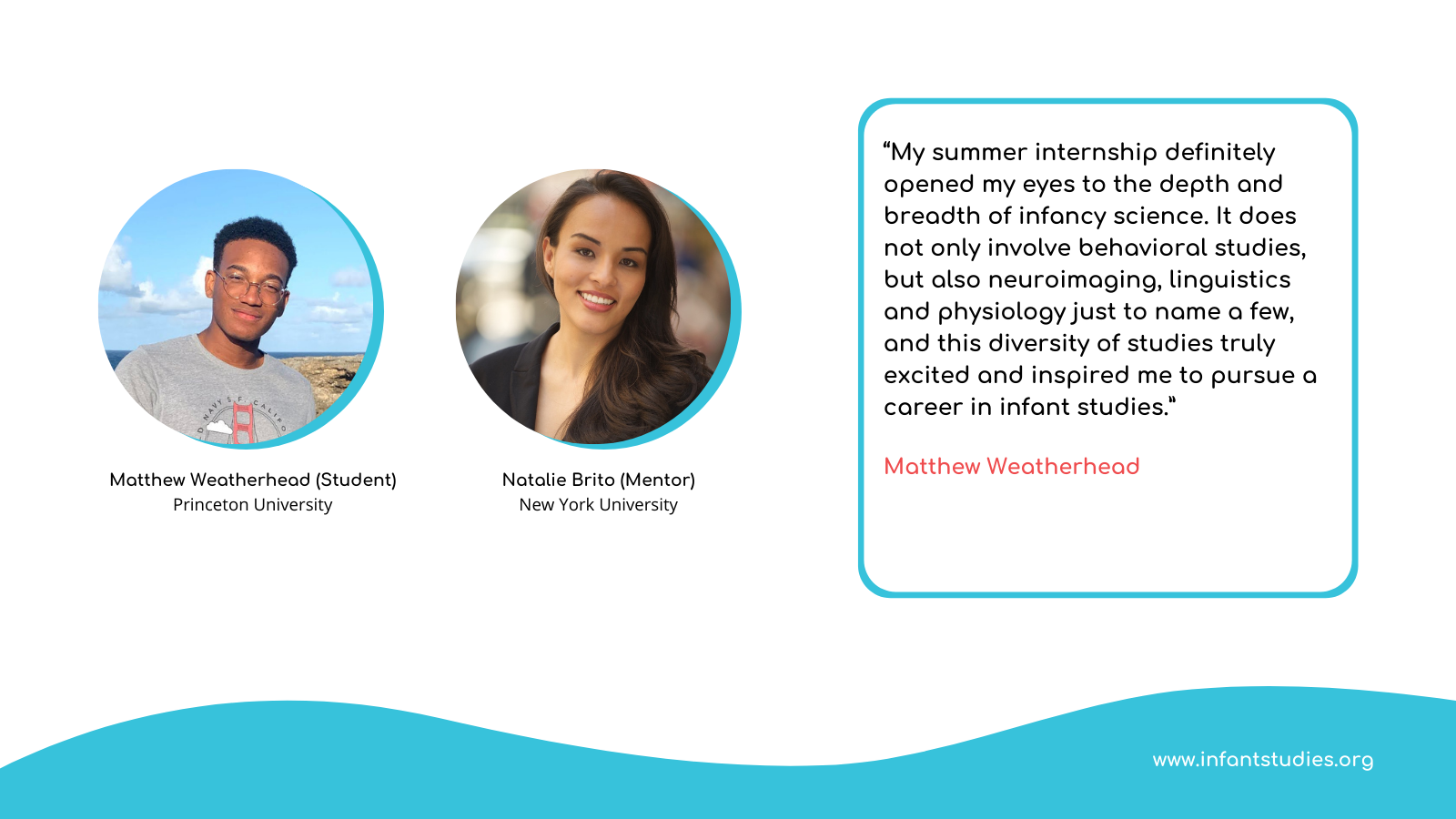 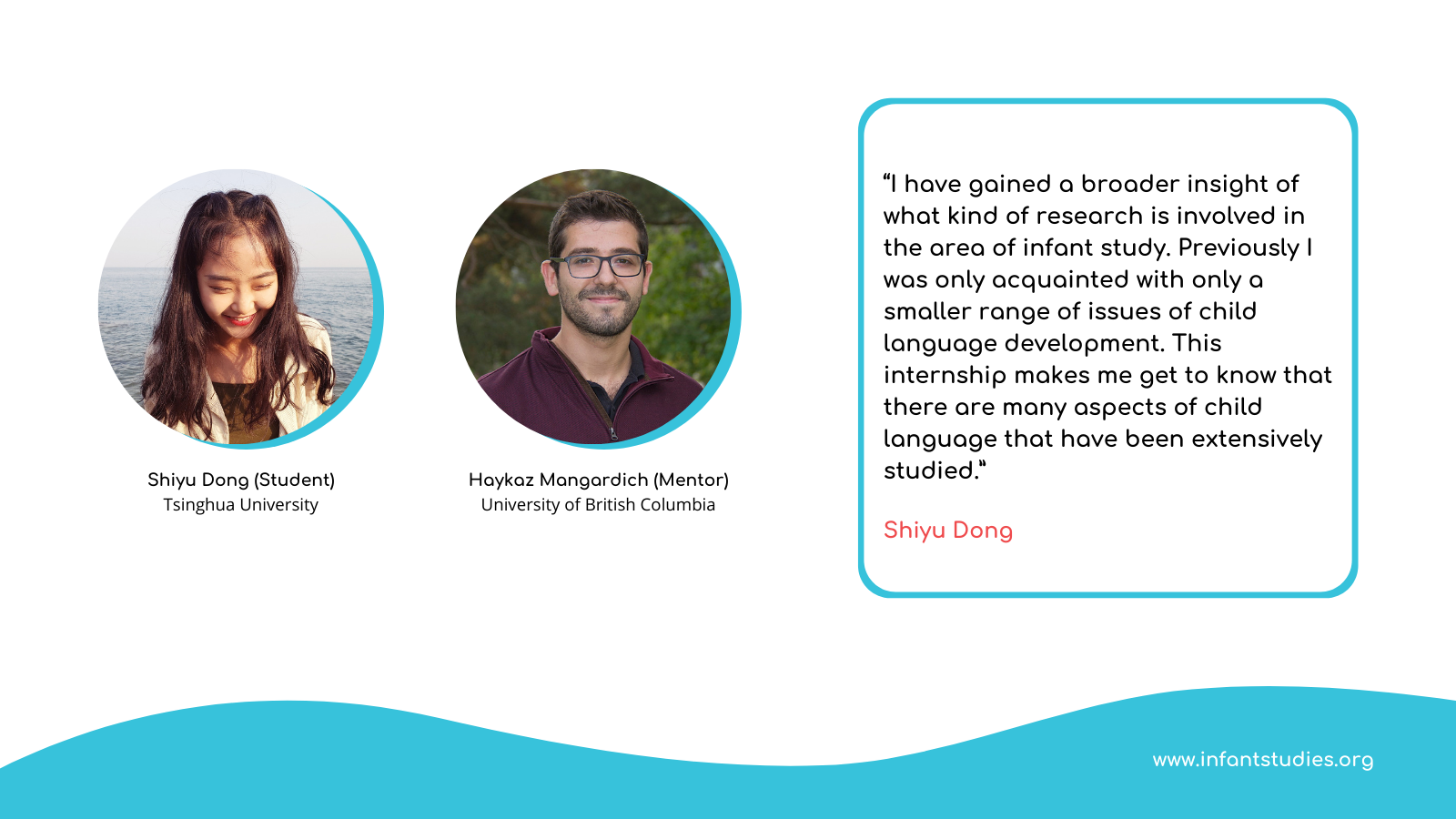 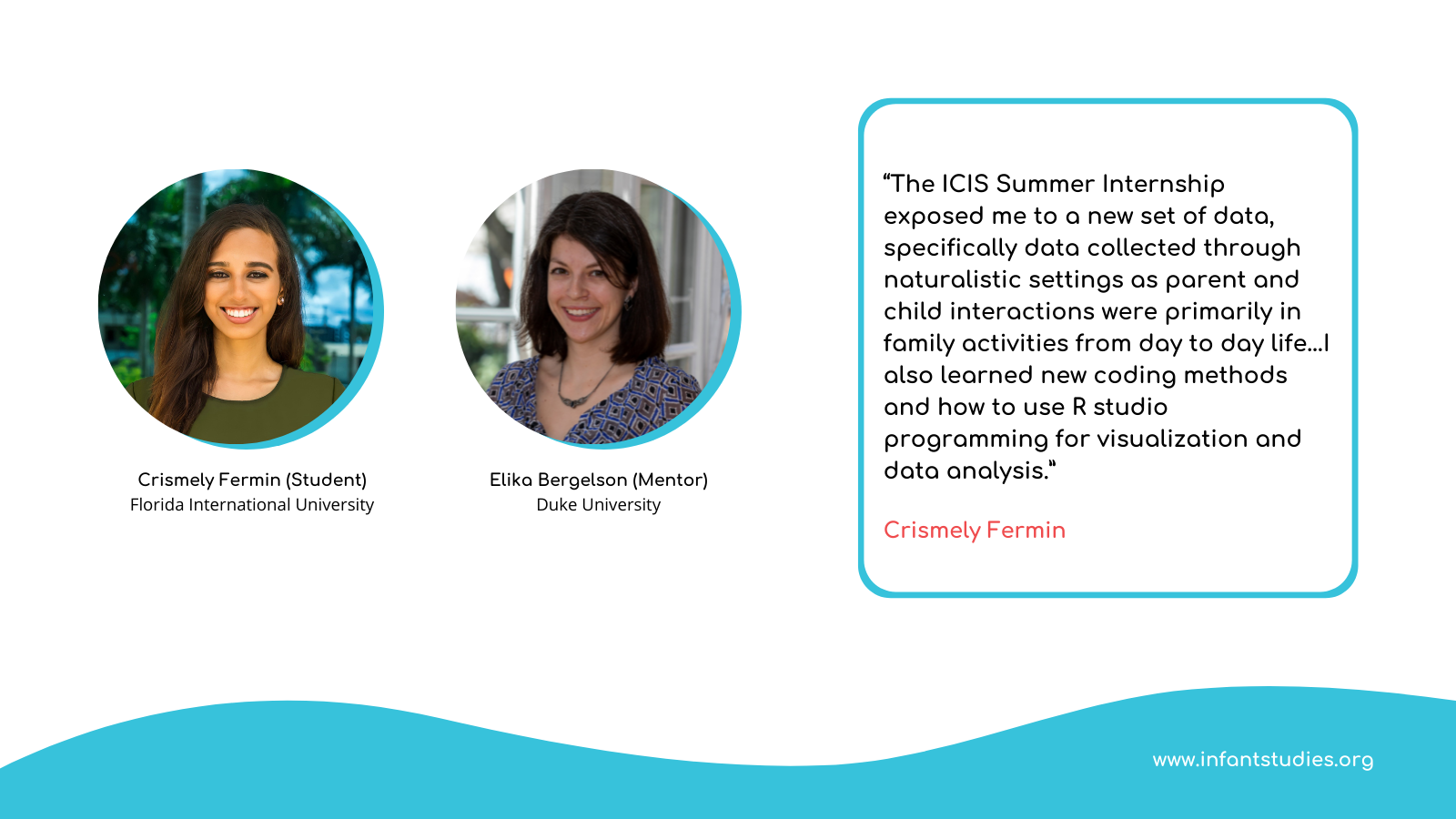 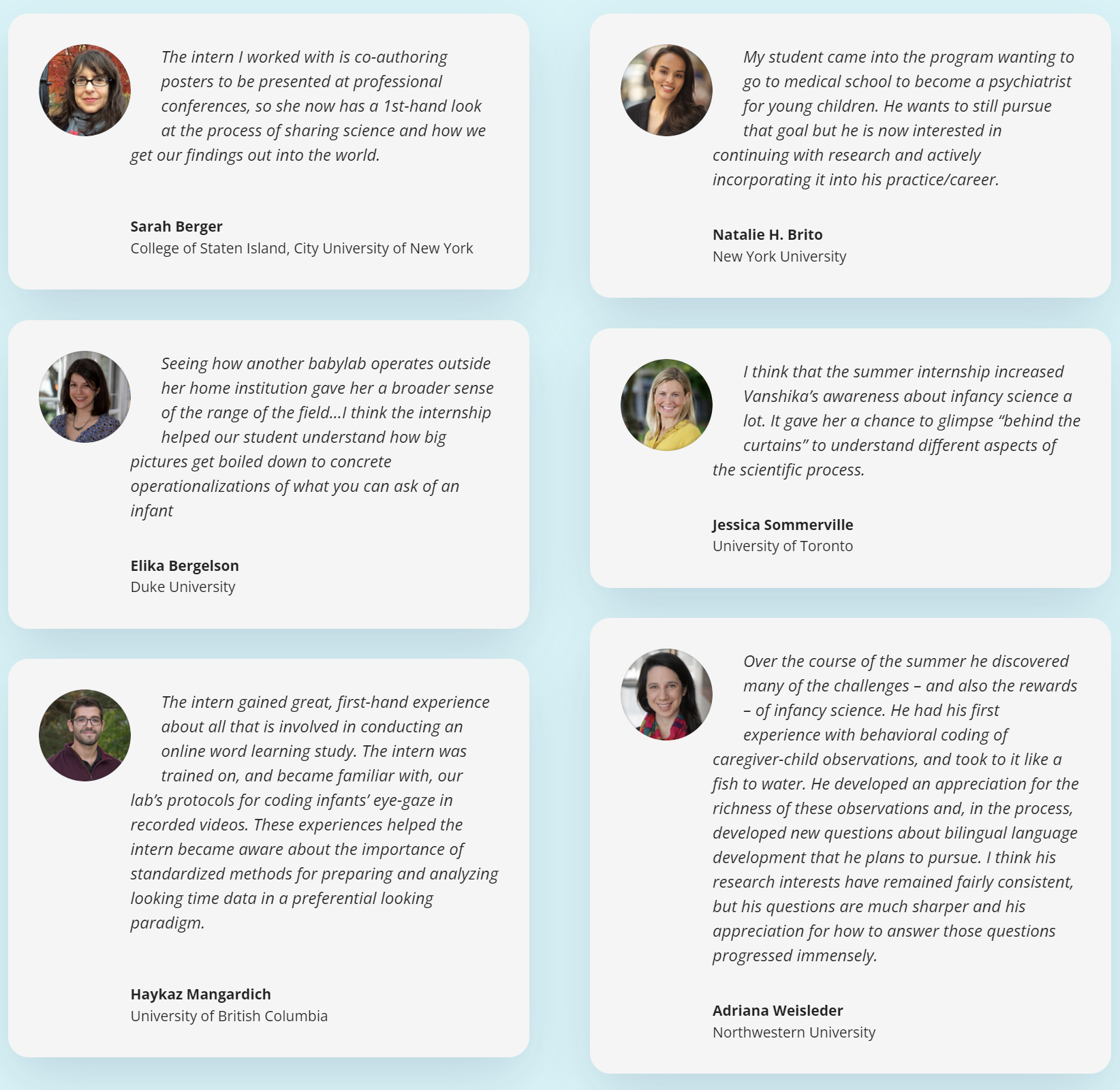