The origins of the International Congress of Infant Studies can be traced back to the early 1960s, when, as described by ICIS historians B.Z. Karmel and J.M. Gardner, a small group of psychologists, pediatricians, psychiatrists and neurologists studying infant development decided to hold a meeting to discuss the latest research. 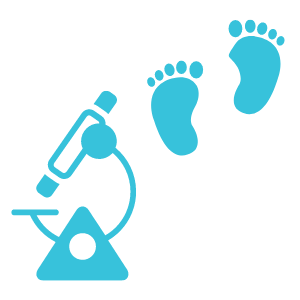 The origins of ICIS, which was known as ISIS (International Society on Infant Studies) from its inception until 2015, can be traced to an informal, interdisciplinary group of 30-50 researchers (the Correspondents on Research on Infants or CRI) that included Psychologists, Pediatricians, Psychiatrists, and Neurologists. CRI members—representing nearly all the major infancy researchers at the time—began to meet in the early 1960s to share their work on infant development. A sub-group of CRIers met monthly in New York and New Jersey, including Marc H. Bornstein, Nathan Fox, Judy Gardner, Bernie Karmel, Michael Lewis, David Lewkowicz, William Fifer, Susan Rose, Holly Ruff, and Gerry Turkewitz. Others who often often visited the group included Joe Fagan, Robert Fantz, Marshall Haith, Bill Kessen, Marian Sigman, and Daniel Stern.

At the time, advances in medicine and increased numbers of premature and sick infants surviving pregnancy and childbirth led to an explosion of infant research. The rapid expansion in infant research highlighted the need to establish an independent venue for CRI members to share their theoretical work and empirical research.

As a result, the first International Conference on Infant Development was organized in Providence, Rhode Island in 1978, under the leadership of Lewis Lipsitt. (Notably, Lewis set the stage for ICIS meetings to have an element of fun mixed in with serious science by inviting a professional yo-yo master to teach researchers how to use a yo-yo!) For several years, the larger ICIS conference followed CRI meetings, being held in whichever city served as the designated CRI site. The local CRI researcher served as program chair and made all arrangements (including signing contracts for hotel “rack rates” and determining the location of the conference dinner). The broad appeal of the ICIS conference ensured its success: registration fees consistently exceeded costs, allowing the congress to consistently meet in the off years of SRCD.

In addition to hosting the first ICIS conference in Providence, Lewis Lipsitt served as founding editor of Infant Behavior and Development (IBAD), which grew further under the vision of Carolyn Rovee-Collier during her 18-year tenure as editor. Lipsitt and Rovee-Collier also founded and co-edited the series Advances in Infancy Research, to which many original CRIers contributed.

Although ICIS members adopted IBAD as their unofficial journal, by the 1990’s the Society wanted a journal that it could independently control. In response, Esther Thelen (President of ICIS at the time), Rachel Keen (President-elect), Nathan Fox, and Marian Sigman negotiated with the assistance of Attorney Jeff Pasek the new journal Infancy with Lawrence Erlbaum in 2000. Leslie Cohen served as the first editor of ICIS’s flagship journal, followed by Richard Aslin, Martha Ann Bell, John Colombo, and Gavin Bremner as current Editor.