We’re pleased to announce the ICIS 2020 program. Click on the tabs below to review the program by day. Expand/close the text boxes to view the session descriptions.

(Please note, program may be subject to change)

Led by Steve Luck, Center for Mind and Brain, UC-Davis

The Micro ERP Boot Camp is a 1-day version of the 10-day UC-Davis ERP Boot Camp.  This workshop provides an intensive introduction to the ERP technique, designed for infancy researchers at the graduate, postgraduate, and faculty levels. It will be designed for individuals who have recently started using ERPs, are thinking about starting a line of ERP research, or just want to be able to understand and critically evaluate published ERP research. No prior ERP background is necessary (but it will also be valuable for people with prior ERP experience).

Individuals with no prior ERP background are encouraged to prepare for the workshop by reading the first two chapters of An Introduction to the Event-Related Potential Technique, 2nd Edition (MIT Press).

ICIS have exclusive access to Glasgow Science Centre for the reception. It’s a great chance for delegates to connect with friends and colleagues, and explore the centre.

Bring the family to Glasgow and come along to this wonderful venue on opening night! See science and technology presented in unique and inspiring ways – for all ages. 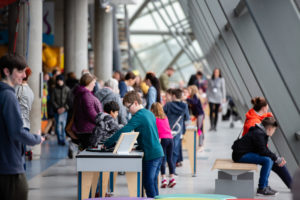 Modern Artificial Intelligence is capable of impressive feats of learning, such as face recognition, voice to text transcription, and predictive customer support. However, it remains remarkably free of common sense. Although AI programs can provide simple factual information quickly, they are notoriously bad at the types of simple comprehension that humans find effortless. Asking Google “Who was president when Lincoln was born?” yields a lot of information about Lincoln, but none at all about James Madison (who was president when Lincoln was born). Asking a machine if an elephant can fit through a doorway results in a lot of jokes, but no information that would help a robot decide if it might reasonably attempt such a deed. To date, even advanced machine learning algorithms provide only narrow, very specialized “intelligence,” and their path to this content is often obscured in a black box.  Common sense—the things that almost all people understand about how the world works—has never been successfully instilled in a machine. This is partly because common sense relies on background knowledge that human beings accumulate as we develop from conception into adulthood. This is knowledge that includes intuitions such as how the physical world works, how people are motivated, and how agents and objects interact. Therefore, in attempting to build more human-like AI systems, we might do well to heed Alan Turing, who asked, “Instead of trying to produce a programme to simulate the adult mind, why not rather try to produce one which simulates the child’s?” A truly developmental approach to AI could yield breakthroughs that might be impossible with any other approach.

In the interest of advancing the science of Machine Common Sense (MCS), the U.S. Defense Advanced Research Projects Agency (DARPA) has funded a large-scale project that will allow close collaboration between developmental psychologists and AI engineers. This project involves three teams that will be working in the coming years to develop machine agents capable of responding in controlled circumstances as infants of various ages would normally respond in those circumstances. These teams represent a variety of theoretical viewpoints on how development and cognition proceeds in infancy. They consist of scientists from Harvard, MIT, IBM, and Stanford (Cora), Berkeley, Carnegie Mellon, and the University of Michigan (MESS), and Oregon State, New York University, and the University of Utah (OPICS). An additional team has been assigned the task of designing the virtual contexts and tasks in which the machine agents will be evaluated; this team, called PIAGET (Psychometric Intelligent Agent Graphical Environment and Testbed), consists of scientists from Next Century Corporation, Barnard College, New York University, the University of California at Davis, and Pitzer College/Claremont Graduate University. Today’s roundtable will feature representatives from DARPA as well as from each of the four teams working on this project. Short presentations by the panelists will be followed by a question-and-answer session. This symposium will keep infancy researchers abreast of the new MCS project, and afford the teams the opportunity to hear a variety of viewpoints at this nascent stage of the program.

In combination with the New America Foundation and the Jacobs Foundation, ICIS is about to launch the second class of the Learning Sciences Exchange, or LSX. Created to attract exceptional mid-career fellows who are passionate about working across disciplines to improve the lives of young children and families, these fellows are from the world of journalism, science of learning, educational policy and entertainment. This session begins with an overview of the LSX experience, followed by presentations by members of the three teams who will describe what they learned from their participation and how we can work across disciplinary boundaries to strengthen the ways we translate science into practice.

Click here for more information on the Presidential Symposium speakers

Working title: Top tips I have learned during my career

Organised by the ICIS 2020 Student Committee

Thank you to our 2020 Sponsors & Exhibitors!